Random Thoughts Of A Wednesday Evening

1.  Yes, I am well aware that this is Thursday.  What you are not aware of is this is yesterday's post.  I got this far and decided I was too sleepy to be coherent, due to waking up at 3:00 AM and not being able to get back to sleep.

3.  Someone was really tired of this weave.  She left it in the parking lot at the plant. 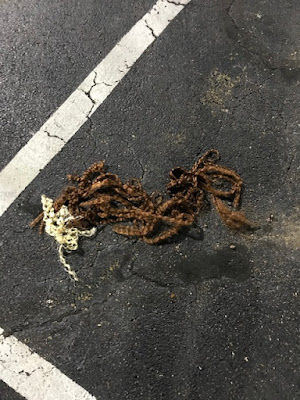 4.  Stalker wasn't at work today, thank goodness.  We all got a little break from him.  He's still wearing his mask, but he must not be too concerned about getting sick, because he's still standing right up on top of people.  I mean, literally.  His fat belly laid up right against people's backs.

5.  The Boss Who Must Not Be Named asked me yesterday if I wanted to go back to second shift.  I briefly considered it.  At least it would get me away from Stalker.  After thinking about it, I decided between the hours and their supervisor, I would stay put.  Nobody likes their supervisor.  He's been on a firing spree lately.  That's part of why they are so short handed all the time.

6.  I guess summer is here.  At least until next week. 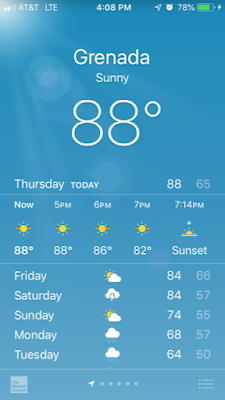 7.  I didn't like the hours of second shift -- not so much for the hours, but because I felt like I was having to watch the clock all day.  I like getting up and going to work first thing, then not having to think about it any more.

8.  There was something else I was going to write about yesterday, but now I can't remember what it is.

9.  I haven't forgotten about doing another piano recital.  I'm going to work one up, but right now, some days, it's all I can do to get ten minutes of practice in.

10.  By the way, Stalker doesn't come near me.  He knows better.  But he still stares at me all day.  I guess he thinks I can't see him with that ridiculous mask over his face.  Yesterday, one of my coworkers sneezed, and he said, "You do that again and they'll put you in quarantine!"  She shot back, "Sneezing ain't got nothing to do with that virus!"  Atrocious grammar aside, she made him look a fool.  I mean, even more than he already does.